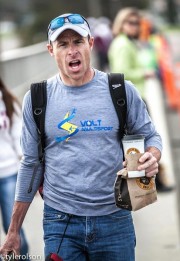 Education: BA from Dartmouth College in 1994 with a double major in Government and Psychology followed by a JD from University of Southern California Law School in 1997

Favorite Swim Workout: Anything descending or 1000 meters for time

Favorite Bike Workout: Easy spinning from Solana Beach to Oceanside or any

How did you get into the sport of triathlon? After swimming in college, I went to law school and put on a few extra pounds for a couple of years. In 2006, a college friend of mine and I decided to run a marathon, trained and completed the North Olympic Discovery Marathon. I finished 19th and ran a 3:19, and realized that I might have some ability in endurance running, which was ironic because I had always been a drop dead sprinter in swimming. After running a couple of marathons (including my high water mark in Boston), I also realized that my body was not designed to take the training required for serious marathon running, and therefore decided that since I could swim and run, triathlons might be the thing for me. After my first sprint triathlon, I was totally hooked and have been trying to figure out how to bike ever since.﻿﻿