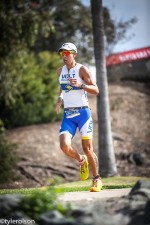 Education: BS Electrical and Computer Engineering with a double major in Information and Decision Systems from Carnegie Mellon University 1996

Favorite Swim Workout: Main set: 10x100m on if you don’t make the send-off then you sit out and wait for the next one. Goal is to have an interval that you can do a minimum 5, but shoot for 7, if you can do all 10 it’s time to bump up the interval. Throw this main set in your workout once a month and see how it goes. 10x100m on 1:30 (long-course meters) is a good start.

How did you get into the sport of triathlon?: My wife Cheryll signed up for a sprint Triathlon in Santa Barbara back in 2007. At the time, I was 30 pounds heavier and my primary purpose was to support her in achieving her goal and cheer her on. Race weekend arrived and the day prior to her sprint race, we watched the “Long Course” competition. It was what I saw that day that got me involved in the sport of triathlon. A man was struggling to make it out of the water of the 1 mile swim; he was on his belly and using his arms to drag himself to the shore of the beach. Two men quickly ran to his “aid” and lifted him out of the water, one on each side. I soon realized that this man had no use of his lower extremities. They ran him into transition and placed him on his “hand-cycle” and within minutes off he went to tackle the 34 mile bike course, powered by his arms. He returned and the same men helped him into his “wheel chair” and again off he went to tackle the 10 mile run course. I eagerly awaited his finish and at that moment of him crossing the line, I stood there awestruck and inspired. I said to myself, “If this guy can do it, so can I…what excuse do I have not to give this a shot?” As of 2011, it’s been a little over three years since that day. Since then, I have competed in 31 triathlons, 6 running races, lost over 30 pounds, qualified for (on my first 70.3) and raced the Foster Grant 70.3 World Championships, qualified for (on my first marathon) and raced the Boston Marathon. I have also gone back to race the Santa Barbara “Long Course” triathlon for three consecutive years (2008 – 2010), the same race that got me inspired back in 2007. This last year (2010) I finished 3rd in my age group and had the fastest overall run split amongst all the age groupers.﻿﻿