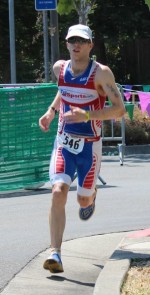 Athletic Background: Started endurance career as a runner in the early years, and has been part of an Arizona high school state championship cross country team and the NCAA D1 team at the University of Arizona. Started competing in triathlon as a Freshman in college, and attended numerous collegiate national championships as a University of Arizona TriCat. During high school, was also active in tae kwon do.

Favorite Races: Vineman 70.3. This race has the right balance of course challenge with rolling hills, atmosphere of wine country, and strong competition. Just watch out for falling trees.

Favorite Swim Workout: 3×800, descending with 1 minute rest in between each

Favorite Run Workout: Bartloop. A secret 16 mile hilly course in Tucson, AZ. Guaranteed to take 2 minutes off your next 10km

How did you get into the sport of triathlon?: My Freshmen year of college, I decided to become a swimmer in order to get buff, so I joined a club swim team…for a day. After getting lapped multiple times by 12 year old girls, I decided that I might be better served utilizing my running experience. I joined the university triathlon team the next day. After a brutal first race in Rocky Point a few months later, I decided the sport was nuts and swore I’d never do another triathlon. Since my memory is short term, after the summer I bought a bike and started to train for triathlon while continuing to run cross country. Over a decade later, I still train myself and others for triathlons of all distances in Pasadena, CA and maintain active involvement in local triathlon groups.﻿﻿